In 2019, another 4% increase is expected in Swiss insolvencies.

Next year, we expect to see some stabilisation of insolvencies at high levels, with a -1% change forecast. Risks – especially external demand and capacity constraints – remain to the downside.

Respondents to our Payment Practices Barometer Survey in Switzerland reported 65.6% of B2B sales were made on credit in 2019 (a significant increase on last year, which averaged 28.1%). This puts Switzerland first among the countries surveyed in Western Europe, ahead of Austria (65.3%, up from 29.5% last year) and Germany (59.3% up from 24.7% one year ago). In Western Europe overall, credit-based sales increased to 60.4% from 41.4% last year.

The increased use of B2B trade credit might reflect the need of businesses to boost sales on foreign markets, to offset the negative impact the strong Swiss franc has on export flows. Domestically, it may also reflect the current insolvency environment, where further business failures are expected. In this regard, B2B trade credit plays a chiefly financial role, with suppliers providing liquidity to their customers in the form of deferred payment. 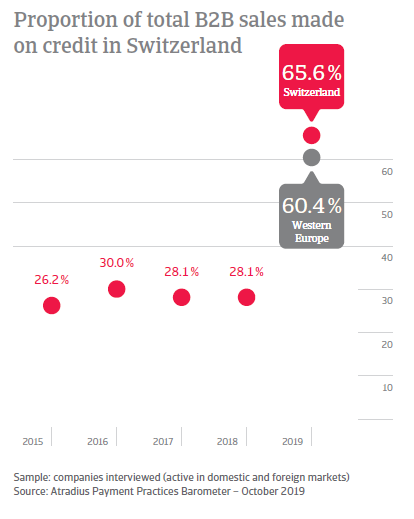 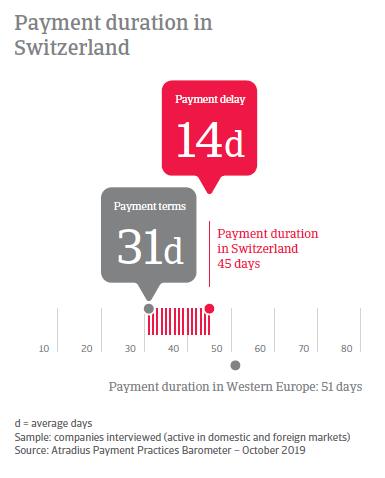 Compared to the same survey period last year, survey respondents in Switzerland grant longer for the settlement of B2B invoices. Average payment terms recorded in Switzerland stand at 31 days from invoicing (up from 27 days last year). These compare to a 34 days average for the region.

27.4% of the total value of B2B invoices issued by survey respondents in Switzerland over the past year remained outstanding past the due date. This compares to the 28.9% average for Western Europe. Despite increased timely payments from B2B customers (69.2% of invoices paid on time, up from 57.1% one year ago), respondents in Switzerland do not turn overdue invoices into cash earlier than last year (on average within 45 days from invoicing as one year ago). This is in contrast with survey findings at regional level, where average invoice-to-cash turnaround decreased to 51 days down from 57 days last year. More respondents in Switzerland (50%), than in Western Europe (42%), reported no significant impact on business arising from late payments. This suggests Swiss respondents have a sharp focus on the management of receivables. Despite this, survey findings in Switzerland highlight a significant increase in the proportion of write-offs of uncollectable accounts, currently averaging 2.3% of the total value of B2B receivables (up from less than 1% last year). This compares to a 2.2% average for Western Europe. This signals significantly lower efficiency in collection of overdue accounts compared to the same survey period last year.

Overview of payment practices in Switzerland

B2B customers in the Swiss agri-food sector are extended the longest payment terms
Survey findings in Switzerland reveal that respondents from the agri-food sector extended the longest payment terms to their B2B customers (averaging 54 days from invoicing). Average payment terms across the other sectors surveyed in Switzerland range from 39 days in the consumer durables sector, to 22 days in the ICT/electronics sector.

Over the past year trade credit risk in the Swiss construction sector has significantly deteriorated to the point where nearly one third of the total value of B2B invoices remained unpaid at the due date. In the construction and agri-food sectors the average invoice to cash turnaround increased significantly over the past year. The Swiss ICT/electronics sector recorded the greatest improvement in customers’ payment speed compared to one year ago. The consumer durables sector recorded the lowest proportion of past due B2B invoices to a low of 18%.

Swiss micro enterprises cash in past due payments notably later than one year ago (on average with 47 days from invoicing, up from 40 days last year), and 25% of invoices are past due payments. In contrast, the payment behaviour of B2B customers of Swiss large enterprises improved markedly over the past year. The proportion of invoices paid on time increased to 66% from 36% one year ago. Swiss large enterprises also collect payment of past due invoices earlier than last year (on average with 45 days from invoicing down from 51 last year). Similarly, SMEs display a shorter invoice-to-cash turnaround than last year (on average 44 days from invoicing, down from 49 last year). This is likely to have been triggered by an increase in on time payments to 68% of the total value of B2B invoices, up from 53% last year. 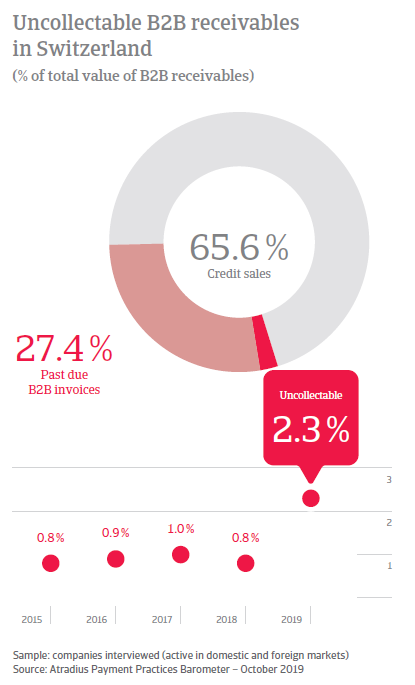 Mathias Freudenreich, Country Manager of Atradius Switzerland: “Western Europe faces a 2.7% increase in insolvencies this year as economic growth decelerates and the manufacturing sector struggles amid lower global trade. Switzerland is contributing significantly to the region’s upward trend, as the number of Swiss business insolvencies has been constantly increasing since the aftermath of the eurozone debt crisis.

The increase in insolvencies expected in Switzerland this year marks another year of record-high business failures in the country, and puts a strain on businesses financial stability. Adding to this is the strength of the Swiss currency, which is particularly challenging for the construction sector and Swiss exporters, the latter of which comprises two-thirds of Swiss GDP.

Looking ahead, we forecast some stabilisation of insolvencies at high levels in Switzerland. As our survey shows, businesses are concerned about a deterioration of their B2B payment practices and are working to protect themselves from payment default risks, striving to grow the business despite the number of challenges they face.”

Swiss economic growth is expected to slow down in 2019, as external demand from the Eurozone and the US has weakened and investment growth decreases.

The global economy is losing steam in 2019 and 2020. Ongoing uncertainty regarding the trade war continues to cloud the outlook.

92.5% of Swiss respondents said that they experienced late payment in 2018. This is one of the highest percentages next to that of Austria and Belgium.