The expected economic contraction is lower than Eurozone average 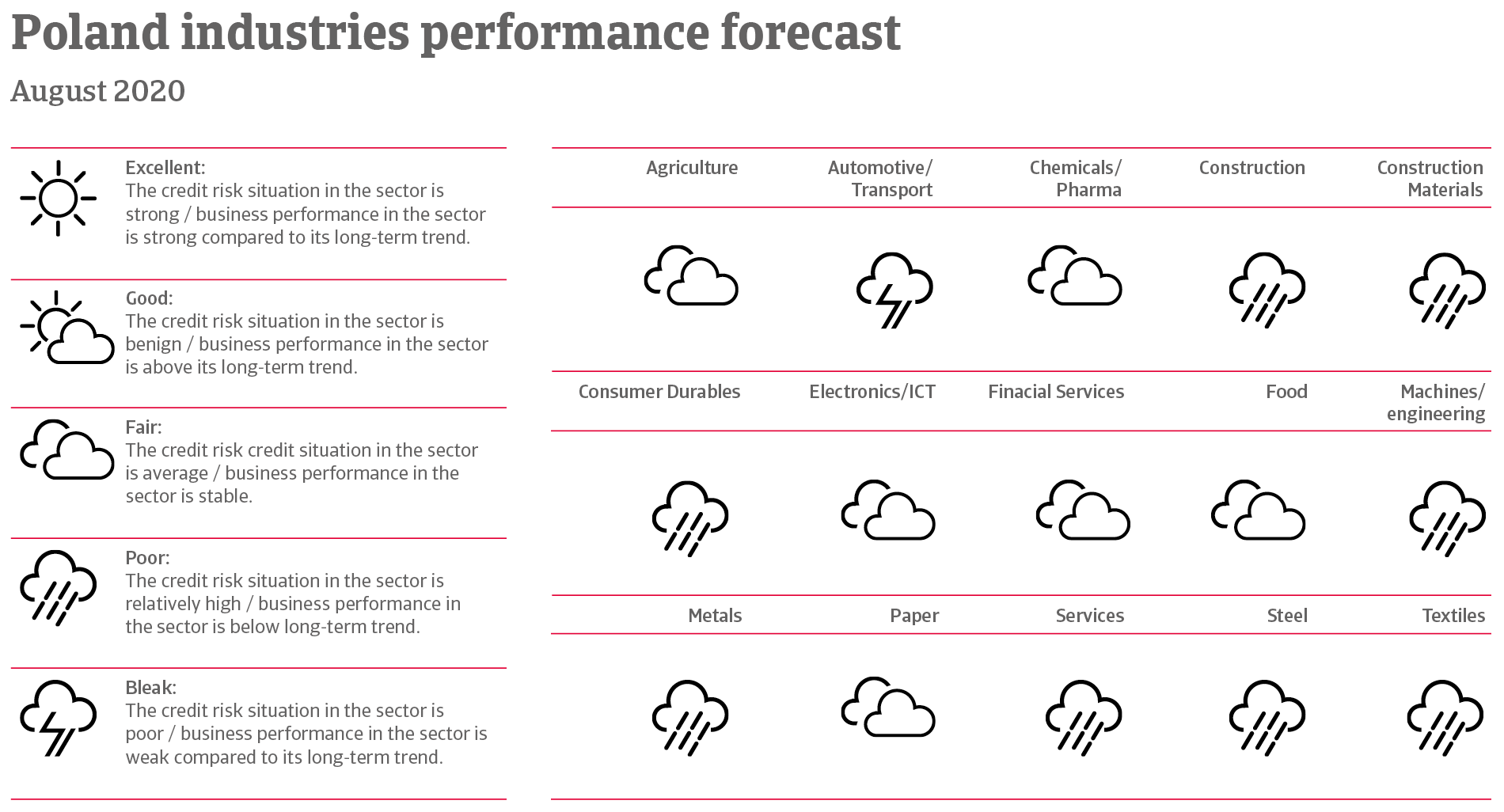 The administration has launched some controversial initiatives

Over the past couple of years, the ruling national–conservative Law and Justice (PiS) administration has launched some controversial policy initiatives, such as seizing direct control of the state broadcasting channels and the security services, as well as purging the heads of state-owned companies. The attempts to curb the independence of the judiciary by imposing political control over courts and the appointment of judges is a major issue. This has triggered mass demonstrations in Poland itself, while the European Commission has repeatedly warned the Polish government that such moves pose a systemic risk to the rule of law and violate EU statutes.

Supported by the PiS, incumbent Andrzej Duda won the presidential election run-off in July 2020 by 51% to 49% against the liberal candidate Rafal Trzaskowski. The narrow result reflects the political division of the country, with Duda gaining most support among elderly voters and those from the more rural eastern and southern regions, while Trzaskowski performed well among younger voters, in the larger cities and the western regions of the country.

Poland´s economic contraction due to the coronavirus pandemic is expected to be 3.5%, much lower than the Eurozone recession of 8%. The economic performance is less dependent on exports compared to Poland´s Central European peers like the Czech Republic, Hungary or Slovakia. At the same time private consumption accounts for 58% of GDP, reducing the vulnerability to external shocks (as evidenced by avoiding a recession in the 2009 credit crisis). In 2021 the economy is forecast to rebound by 5.6%.

Polish exports are forecast to decrease by 4.3% in 2020 (compared to Eurozone exports down 11.1%), as external demand has deteriorated, especially for cars and car parts. Private consumption is expected to shrink 4.8% in 2020 (Eurozone: down 9.6%) due to the pandemic spread, subsequent lockdown measures and rising unemployment.. Increased government payments to families (e.g. a child benefit programme) and pensioners, along with tax breaks, continue to sustain private consumption.

In order to support the economy, coronavirus-related fiscal stimulus measures (including credit guarantees) account for 13% GDP, or EUR 70 billion. Poland will also largely benefit from the “Next Generation EU” fund to help countries recover from the Covid-19 recession, and from additional EU subsidies. Monetary policy has been accommodative so far, with the Central Bank lowering the benchmark interest rate three times since March 2016, to a record low of 0.1% in July 2020.

The fiscal deficit is expected to increase to 8.5% in 2020 (from 0.8% in 2019). At 56% of GDP in 2020 (47% of GDP in 2019) public debt is rising but remaining sustainable. While public debt is subject to some currency risk and vulnerable to international investor sentiment, its overall composition remains low-risk.

Some sectors are severely impacted by the economic downturn

In the construction industry operating margins are very tight, with increased credit risk mainly for smaller players. Due to the ongoing recession, businesses are additionally affected by postponement of projects and reduced order volumes. Payment delays and insolvencies are expected to increase in 2020. The same accounts for automotive, which suffers from deteriorating sales for passenger cars and commercial vehicles, and the fact that many businesses are more indebted than their counterparts in other sectors.

As a consequence of deteriorating demand from those key buyer sectors, the machines, metals, and steel industries are suffering, and both payment delays and insolvencies are expected to increase in 2020, especially among smaller players.

The consumer durables industry and textile wholesalers and retailers have been negatively impacted by temporary lockdowns, lower consumer sentiment and rising unemployment. The financial strength of many businesses has seriously deteriorated, and insolvencies are forecast to increase in those industries.

Due to the further tightening labour market, shortage of workers is increasingly becoming an issue, reducing production capacity especially in the manufacturing sector. Shortage of labour could weigh heavily on potential economic growth, which is exacerbated by the early retirement of a higher share of the workforce due to the lowering of the retirement age.

In Central Europe, Poland's economy looks most vulnerable to the financial and economic fallout should the negotiations between the EU and the United Kingdom over their future relationship fail. Annual remittances from Poles living abroad amounted to about EUR 7 billion in 2019, a large share of it from the UK. In the longer term, the United Kingdom’s departure from the EU could impact EU structural funds, which play a major role in Poland´s economic progress.

The rapid spread of Covid-19 across the globe is taking a heavy economic toll on both advanced and emerging economies. Lockdowns reduce consumption opportunities and create supply-side shocks.

According to Statistics Poland, output of construction and assembly works increased 2.6% in 2019.